$44.95 /mo for 4 rare cigars. For the true cigar connoisseur, this club is unrivaled.

Mind = blown! That is what happened when I heard about this new club. Sure, most people have heard of a cigar of the month club, but as far as I know, this is the first and only Rare Cigar Club. What’s the difference? Glad you asked. Keep reading to find out… 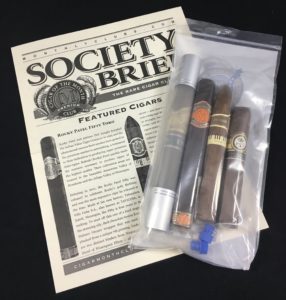 The folks that run the Rare Cigar Club are no strangers to cigars or even to cigar clubs. In fact, we might as well call them experts since their “regular” cigar club earned our Editors’ Choice award, along with a stellar 5-star rating! Therefore, we were hardly surprised to find that our shipment of rare cigars arrived in excellent condition. As we noted in our review of the Premium Cigar of the Month Club – these guys know how to pack and ship cigars correctly.

Our cigars arrived securely packed in a cardboard box. The cigars came in a ziplock bag to keep them fresh. Not only that, but there was a small humidification device inside the bag to keep the humidity level stable during shipment. Not all cigar clubs take this step – but it can make a huge difference in the freshness and smokability of the cigars when they arrive. 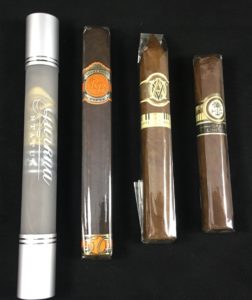 Here are the 4 cigars that we received:

Haven’t heard of these cigars before? There’s a good reason! They are all rare, limited or small batch stogies. Take the Rocky Patel Fifty for example. Guess how many other online retailers offer this cigar for sale? Zero. None! We searched high and low and could not find it anywhere. The cigar is from 2011 and only 2,000 boxes were made, selling at about $400 per box when they were released. So yeah, we’d say this cigar qualifies as rare. The other 3 cigars we were able to find available online, but that does not make them any less special. 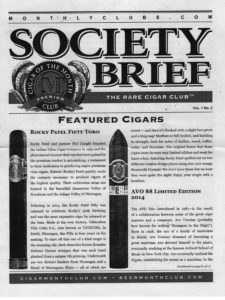 As for the included newsletter, it is top notch. Each cigar receives a nice write-up explaining what makes it unique, some history about the cigar or the brand, what kind of tobaccos that were used to construct it, and what kind of flavors to expect when smoked. We love that they also include a suggested drink pairing – ranging from bourbon to beer.

Also included is a Q&A section and info about reordering featured cigars (you can order a box or just a 5 pack of your favorites).

As stated, these guys know how to run a cigar club. So it should come as no surprise that their website is easy to use, has tons of useful info (see past and current cigar selections and find out how they pick cigars). Registering for the club is straightforward and easy. If and when you decide to cancel, it is as easy as contacting them via email (customerservice@cigarmonthclub.com) or phone (800-625-8238). 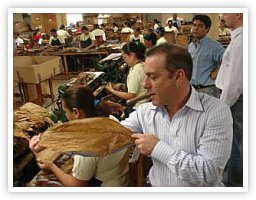 Is $45 per month a lot for a cigar club? It might seem like it considered other clubs average about $30 /mo. – but you need to keep in mind that the Rare Cigar Club is not like other clubs. Sure, you “only” get 4 cigars (regular cigar clubs usually feature 5-6 cigars), but the cigars you get with this club are a cut above.

We valued the 4 cigars we received at about $55-60, but that is assuming you can even find them (we couldn’t find any online retailers that offered the Rocky Patel Fifty). So in our book, $45 is a very fair price for the Rare Cigar Club. We checked out previous month’s cigars that were offered by the club and we were thoroughly impressed with their consistent elite selection.

Let’s be honest, the Rare Cigar Club is not for everyone. Why do we say that? Simple. This club is for true cigar aficionados. If you’re an average Joe who likes a cigar now and then, but you’re just as happy to pick one up at the gas station, then you probably wouldn’t fully appreciate the premium cigars that are offered through this club.

If you are just starting out in the world of cigars, we’d suggest that you start with our other top pick of cigar clubs (Premium Cigar of the Month Club). However, if you’ve been smoking good cigars for a while (or you are buying this for a “seasoned” cigar smoker), then you really need to consider treating yourself to the Rare Cigar Club. It’s worth it!